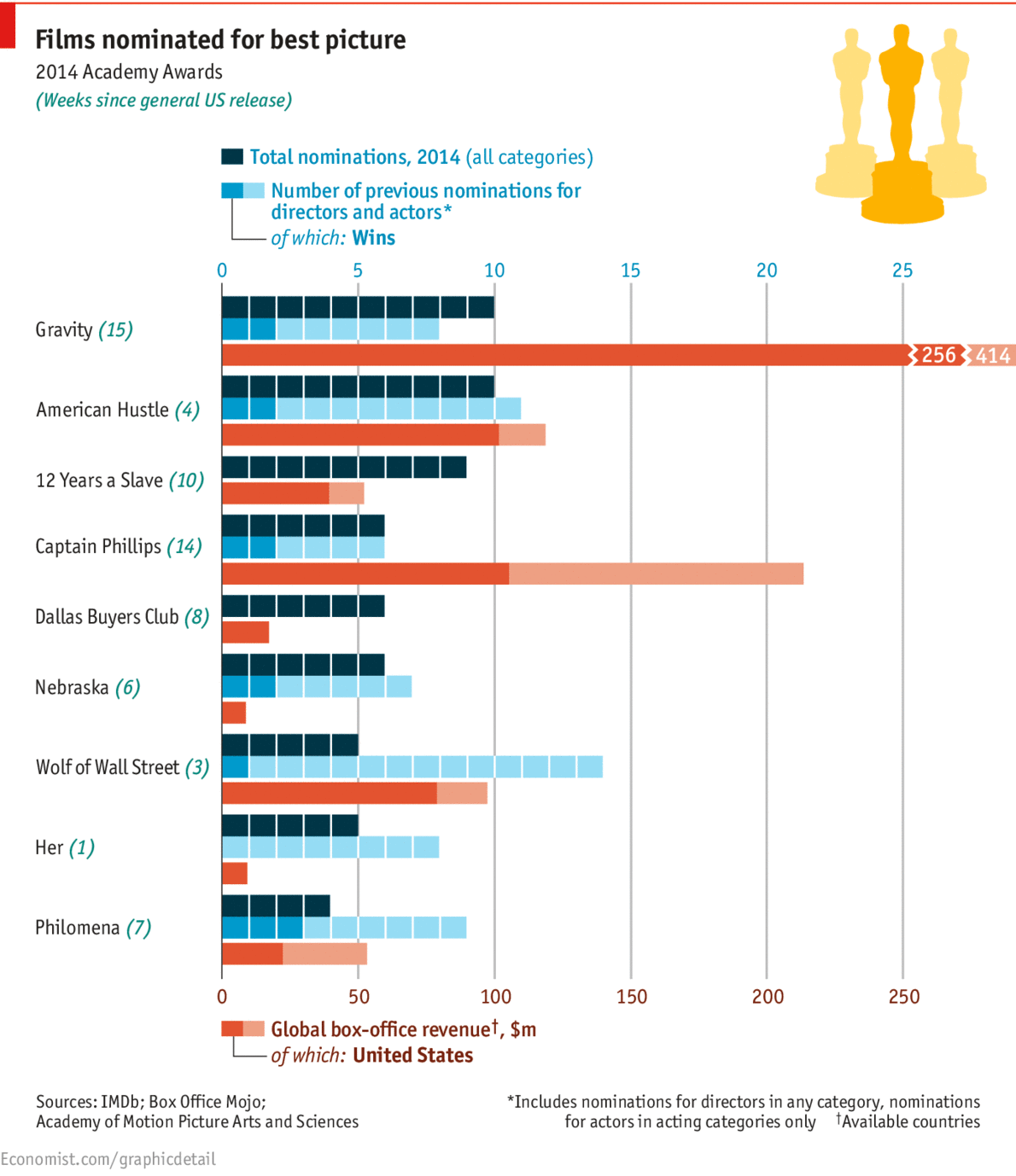 If you are an actor who wants to be nominated for an Oscar you could do a lot worse than catch the attention of director David O. Russell. When four actors secured Oscar nominations for their performances in his film “Silver Linings Playbook” last year, it was the first such full house seen at the Academy Awards since Warren Beatty’s “Reds” in 1981. Now Mr Russell has done it again, with “American Hustle” – a rich but baggy film – securing nominations for Christian Bale and Amy Adams, who performed the lead roles, and Jennifer Lawrence and Bradley Cooper, taking the supporting.

All told “American Hustle” won 10 nominations, as did “Gravity”, Alfonso Cuarón’s remarkably grand-in-visual-scale, tight-in-the-telling story of a disaster in space. Steve McQueen’s magnificent “12 Years a Slave” took nine. None of this was surprising, nor were any of the other nominations. In a very good year for Hollywood cinema, it was easy to find more than enough deserving nominees for just about every category (though it should be stressed that “Jackass presents: Bad Grandpa” is by all accounts only worthy in the context of its makeup and hairstyling). What surprised were the exclusions: Tom Hanks, who has won two Oscars for performances that left less of a mark, was not nominated for his role in “Captain Phillips”; Hans Zimmer’s superb score for “12 Years a Slave” was similarly slighted.

It is a sure bet that one of the three films with the most nominations will end up with the Best Picture prize; it would be a sorry state of affairs if that winner were “American Hustle”. Like Mr Russell’s other recent films, “Hustle” offers the director’s particular take on an established genre – the con-artist film, in this case; the romantic comedy in the case of “Silver Linings”; and the boxing movie for 2010’s “The Fighter”. All surpass or subvert genre expectations with charm, eloquence and excellent performances; all are embedded in social worlds better observed and more excitingly drawn than those to be found in most commercial cinema.

But “Gravity” and “12 Years a Slave” are both, in their ways, landmarks of film. “Gravity” is a tour de force that uses a well-executed B-movie peril-in-space plot to provide a transcendent visual and aural evocation of the vast, the empty and the intimate. “12 Years”, which if it wins Best Picture will be the first film by a black director to do so, navigates the landscapes of slavery with a poise that does nothing to diminish the horror of its story, or the audience’s empathy – indeed its consummate artistry magnifies them. For both of those films to lose to yet another likeable, comfortable story about the American government running con games in the 1970s — also the subject matter of last year’s winner, “Argo” — would be a travesty.