Nejnovější
With partner newspapers in Europe, we’ve sourced 100 years of data to see how the France, Germany, Italy, Spain and the UK have changed since 1914. Zdroj: The Guardian 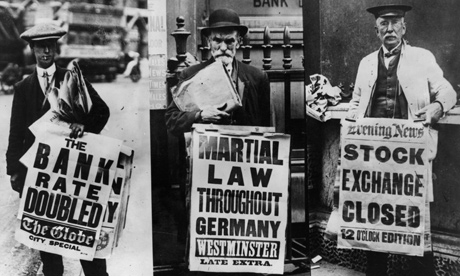 Instinctively, we know that Europe has undergone vast social and economic change since 1914. But what does that change look like when it’s quantified?

Together with Süddeutsche Zeitung, El Paîs, La Stampa, Gazeta Wyborcza and Le Monde we’ve attempted to find out. The data we’ve gathered has been set against images from 1914 below.

Invariably, the absence of a direct threat has made most European countries reduce the size of their standing forces. In Germany, they have shrunk by 96%, in the UK by 89% while in Italy, the army has grown by 20%. 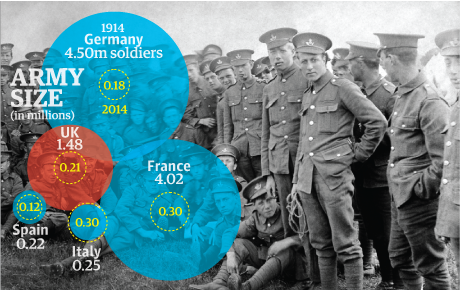 Graphic: Amanda Shendruk, Data: Guardian & European partnersPopulationMeanwhile, the citizens those armies are intended to protect have grown at a rate that is all the more surprising given the loss of life that the first world war produced (the casualty figures are contested by historians but estimates for the UK alone come close to 1 million).Spain has swelled faster than any other country, and is now 57% larger than it was in 1914. The UK has grown by 44% while France and Italy now have almost 37% more people than they did in 1914. 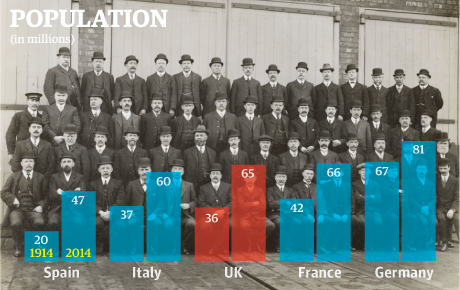 Those rises can not be simply attributed to recent immigration to Europe. The number of births per 1,000 people in Europe has risen dramatically since 1914. 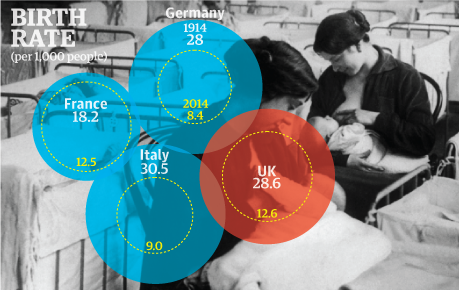 For every year that has passed in Europe since the outbreak of war, almost 4 months has been added to the average citizen’s life. The balance of longevity has also shifted; while the French once outlived their European neighbours by more than 2 years in 1914, they are now surpassed by the Spanish and Italians. 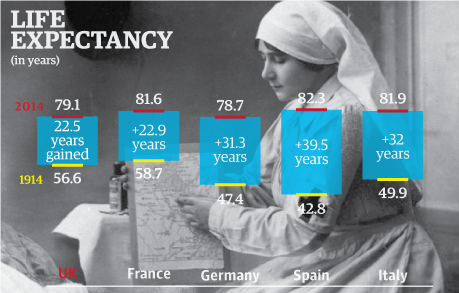